Investing in
the energy
and ecological
transition

What is the energy and ecological transition?

Climate change, the disappearance of biodiversity, the depletion of natural resources, the reduction in energy consumption, the limitation of greenhouse gas emissions etc. – the world is facing numerous environmental challenges. The concept of ecological transition covers an ensemble of principles and practices adopted with the goal of changing our economic and social model in favour of a sustainable decarbonised model to meet these challenges of the 21st century.

The energy transition constitutes one of the major components of the ecological transition, with energy playing a fundamental role in numerous human activities. Given our development models and the long running failure to take into account planetary limits, the problem is more than just ecological catastrophes. The reorganisation of forms of production and consumption has become essential. The concept of transition consequently involves the period required to transform the economy and switch over to an energy system based on the efficient use of renewable resources.

Why is the transition possible now?

The transition needed in the fight against climate warming is now possible. Numerous obstacles have effectively been overcome in order to enable the change in our economies.

People are now aware of the climate emergency, which has now become the leading concern of 47% of Europeans according to a survey conducted by the BVA research group. With political will going hand in hand with public sentiment, the energy and ecological transition is being integrated into stimulus and development plans, notably in the European Union, China and the United States. In advance compared to the rest of the world, the European Union is planning to invest at least 25% of its budget per year in the energy and ecological transition between 2021 and 2027. At the same time, the European Parliament has worked with scientists to adopt the taxonomy, a new legislative measure concerning sustainable investments that should allow the steering of capital in favour of “eco-activities”.

Additionally, the energy transition is encouraging companies to reinvent themselves and adopt new models in order to innovate and create energy services that respond to environmental requirements and challenges.

The four objectives of the energy and ecological transition

New skills over the medium and long term.

Savings as an additional source of financing for projects supporting the energy and ecological transition.

Why invest in the energy and ecological transition?

Investing in the energy and ecological transition means contributing to the fight against global warming by steering savings towards funds that have placed this objective at the heart of their investment process. This involves accompanying the climate transition players thanks to money directed to projects that seek to support this process.

These players in this transition operate in sectors included in the European taxonomy such as clean transportation, renewable energies, waste management and the ecological management of natural resources. These activities also constitute investment opportunities given that they represent profitable themes offering what we believe to be attractive rates of growth.

There are numerous investment themes linked to clean energies and the environment that imply an innovation dynamic needed in the fight against global warming. Investing in these themes involves accompanying the leaders on these markets of the future where certain players stand out based on their technology, expertise and capacity for innovation.

Finally, as demonstrated by Joseph Stiglitz and Oxford University, investing in the transition is the best way to revitalise our economies and create jobs over the medium and long term.* 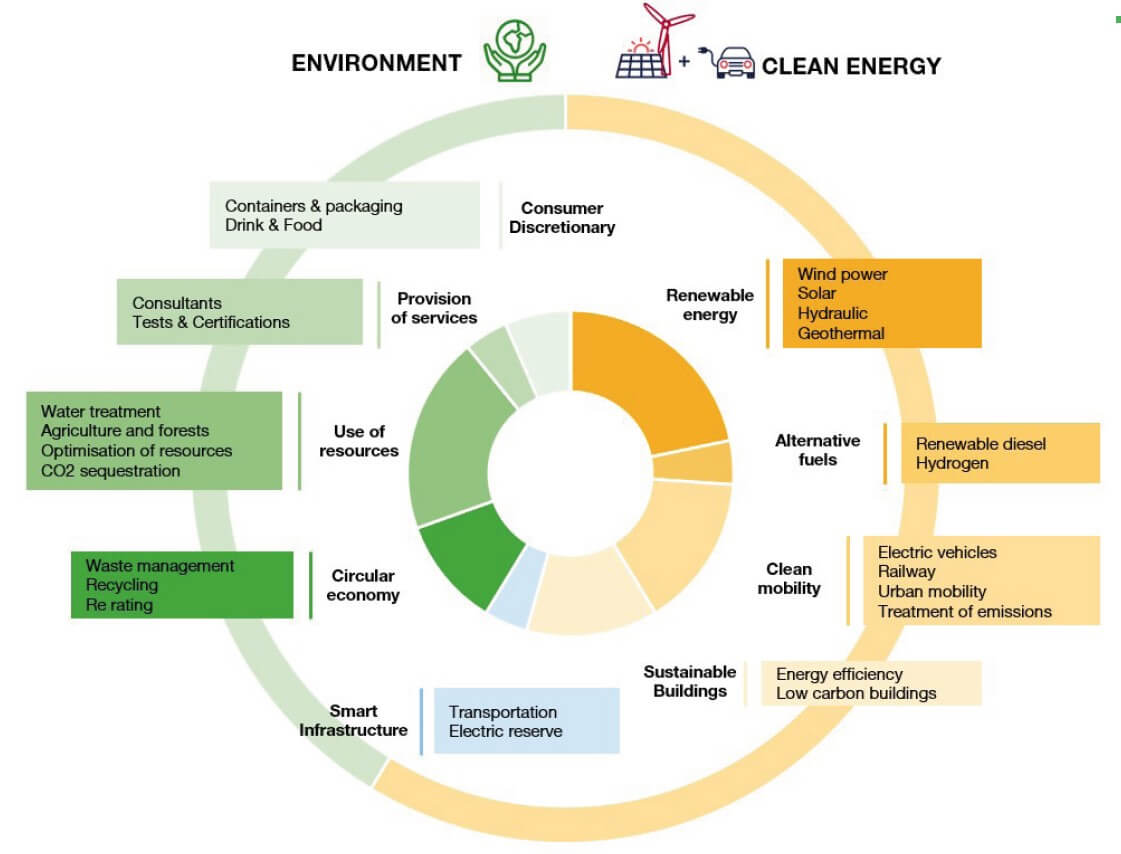 How to invest in the energy and ecological transition?

In order to invest intelligently in the energy and ecological transition, it is first of all necessary to choose a labelled fund. This is a tool created by the local governments that guarantees the transparency and environmental commitment of financial products and has in this manner become a benchmark for both finance professionals and savers.

In order to help investors gain exposure to the growth dynamic coming from the energy and ecological transition, we have developed a strategy that focuses on companies present in “eco-activities” identified by the European taxonomy (with the strict exclusion notably of all fossil fuels and nuclear energy) and featuring an active climate approach involving ambitious and coherent objectives for the reduction in greenhouse gas emission in view of limiting the rise in global temperatures to under 2° C. This strategy has received the Greenfin label from the French government as well as the Austrian Ecolabel.